Everything you need to know about Livsdal air purifiers

If you can’t find the answer you’re looking for, please feel free to get in touch.

Why do I need an air purifier?

Indoor air can actually be up to 50 times more polluted than outdoors. Exhaust fumes. The harmful particles contained in flame retardants used for textiles, furniture and electronics. Pollen. Viruses and bacteria…you name it. And ventilation systems often serve to exacerbate the situation, introducing more air to a space but more pollution too.

Air pollution is also the leading cause of respiratory, cancer and cardiovascular disease. So when we spend up to 90 percent of our time indoors, you can see the importance of breathing in fresh, clean air.

Air purification eliminates pollutants and provides the fresh air that support better health and keeps us energised and efficient.

How much does replacement filter cost?

A HEPA H13 particle filter and full set of carbon molecular filters cost € 1,000 to Livsdal One and € 750 to Livsdal Essential.

How often do I need to change filters?

How do I buy new filters?

You order new filters in our webshop and easily change filters yourself in your air purifier. Old filters should be returned to the nearest recycling center as combustible (Hepa filter) or plastic (carbon filter).

Which particles and gases do Livsdal air purifiers capture?

Which particles do Livsdal air purifiers not eliminate?

Yes. Our industrial grade HEPA H13 particle filter is normally used in environments where the air needs to be absolutely sterile, such as NASA’s Mars lander mission and hospital intensive care units. The filter captures 100 percent of SARS-CoV-2 every time the air is circulated. The virus then die after a few days in the filter.

Why is a Livsdal air purifier any different?

In a word, the difference is in the filters. The filter is the most important component of any air purifier, determining how effectively the air purification actually works. And this is where Livsdal excels.

In addition to the pre-filter that removes visible dust, Livsdal air purifiers contain two other types of filter.

The first is the ultra-high quality industrial grade HEPA H13 particle filter, which removes particles from 0.5 mm down to 5 nm such as soot, mould, pollen, and cigarette smoke.

But beware. Since no official protection for the HEPA designation exists, anyone can claim they are using it. The cost of a true HEPA filter is as high as that of a standard air purifier in its entirety, so you truly do get what you pay for.

The second, a molecule-activated carbon filter, captures the tiniest particles and gases including nitrogen dioxide from traffic exhaust gases and formaldehyde from flame retardants, paint and other building materials.

Most air purifiers simply do not contain any activated carbon at all, while the few that do include a mere kilo at best – which quickly becomes saturated and can no longer capture gases. The Livsdal Essential air purifier comes with six kilos of activated carbon and the Livsdal One with twelve, both offering a full year of the most effective purification available.

It is customary to communicate that a filter has a 99.96 % or 99.6 % efficiency and can capture particles as small as 0.3 micron. This is a misunderstanding from not being able to read a test report of a filter.

The percentage given is not the best performance of the filter but the worst. A HEPA-filter captures basically all of the particles but has to capture more than 99.96 % of the particles otherwise it can not be classified as a HEPA H13. This is important to know in industrial and professional applications. In a consumer air purifier this is of no importance. The filter capture basically all particles that it circulates through the air purifier. If it captures 99.96 % or 99.9992 % is – yes, you get it.

How do Livsdal air purifiers enhance my home?

Air pollution is a leading cause not just of cancer but also respiratory and cardiovascular disease, so eliminating these impurities can help to safeguard your wellbeing. Clean air is linked to higher levels of concentration and efficiency, while at the same time contributing to a good night’s sleep. In addition, air purification relieves the symptoms of hay fever and asthma.

Livsdal air purifiers also emit a low wave-like whisper comparable to the white noise so often used to create relaxing sound landscapes. Placing your air purifier in the bedroom, for example, will help you to fall asleep faster and enjoy better quality sleep.

What health benefits does a Livsdal air purifier offer?

Livsdal air purifiers effectively eliminate the air pollution that makes your body more susceptible to infection. These include traffic fumes, harmful particles from the flame retardants used in textiles, furniture and electronics, and even viruses. Cleaner air also reduces the strain on the lungs, making it easier for the body to recover from illness.

Many filtering techniques emit ozone, which can irritate the lungs and exacerbate respiratory diseases. The molecular filters in a Livsdal air purifier eliminate ozone gas as well as air pollution.

Why is a Livsdal air purifier larger than other makes?

In the case of air purifiers, bigger truly does mean better. The larger the size, the more space there is for filters and the greater the volume of air that can be purified. Plus, larger filters do not need to be changed as often.

How much noise does a Livsdal air purifier make?

Livsdal air purifiers are designed to function extremely quietly. The fan is well balanced, well secured and well insulated. On a comfortable, medium-high setting it emits between 35 and 45 dB. Its low, wave-like whisper is comparable to the white noise often used to create relaxing sound landscapes.

How much energy does an air purifier from Livsdal consume?

Our air purifiers are exceptionally energy efficient. On a medium setting, the modern, brushless EC motor consumes the same amount of electricity as a 15-watt light bulb.

What certifications does Livsdal have?

The industrial grade HEPA H13 particle filter is Eurovent EN1822 certified to capture particles 0.3 microns in size with 99.996% efficiency. It will catch particles down to the size of 0.005 microns. The molecular filters are tested to ISO 10121 standards. 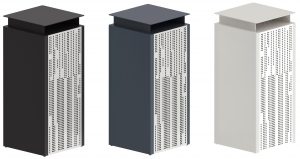 How do I know how many I need for my home?

We are always happy to advise on the perfect approach, so please feel free to contact us.

Where is the best location for a Livsdal air purifier?

Livsdal air purifiers can be placed pretty much anywhere in a room, preferably close to or against a wall.